A total of 82,100 Invitations to apply are issued through Express Entry system this year

3,200 invitations to apply are issued in the new Express Entry draw on December 11 and the minimum Comprehensive Ranking System (CRS) score in this round was 472.

Canada’s main three categories are managed under the Express Entry System are:-

Candidates are ranked in the pool based on the CRS that considers 4 main factors:-

Additional CRS points are given to a Candidate if the candidate is having a job offer although it is now required to be eligible for Express Entry Invitation.

Highest ranked Candidates are invited to apply for Canada Permanent residence through Express Entry Draws from the pool. These Invitations round take place in every 2 weeks.

The time between the draws and the no of ITAs issued may effect the cut-off CRS. Larger draws often result in low CRS cut-off score, but this draw was on the smaller side and produced a slightly increase in CRS cut-off score. 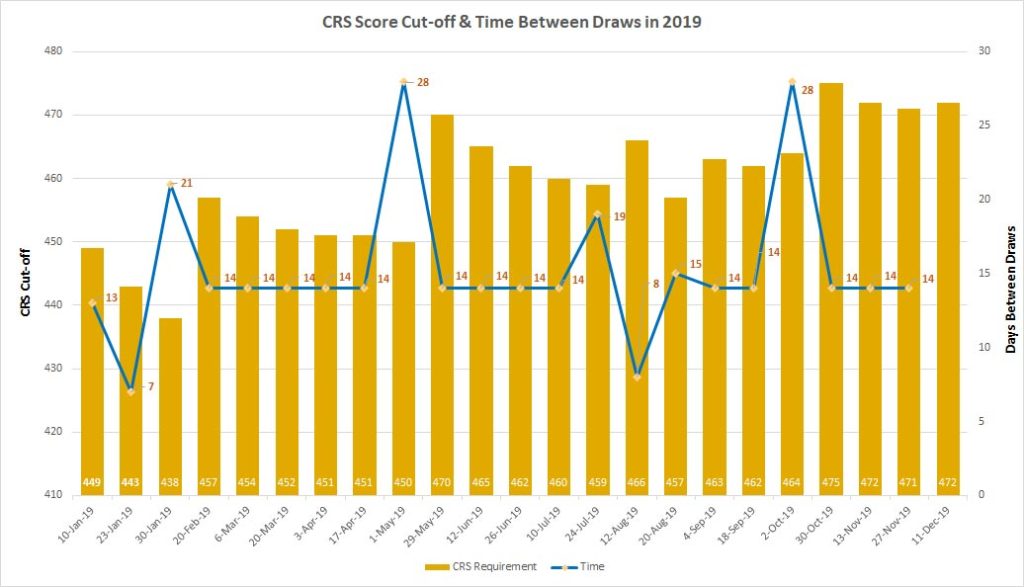 Tie-break time and date is December 6, 2019, at 03:03:49 UTC in this draw that means all the candidates who submitted their profile before this date and time with min CRS score 472 will receive an ITA.

Immigrate to Australia from India

Under Canada’s multi-year immigration levels plan, the approaching year can see the target for new permanent residents admitted through the 3 express Entry-managed immigration programs rise to 85,800, up from 81,400 this year.

The admissions target for Canada’s Provincial nominee Program, or PNP, is additionally set to increase from 61,000 to 67,800 in 2020, a little of that is managed by the express Entry system.

Nine Canadian provinces and 2 territories have what are called “enhanced” PNP streams that are connected to the express Entry system.

These streams permit them to select express Entry candidates and invite them to use for a provincial nomination for Canadian permanent residence and plenty of have lower or maybe no CRS score requirements.

Express Entry candidates who get a provincial nomination receive an extra 600 points toward their CRS score and are effectively secured an ITA.

Not sure exactly what You are looking for or just want clarification? We’d be happy to chat with you and clear things up for you. Anytime.
Get Free Assessment
Call Now

Are you Confused? We can help!

Book Free One to One Consultation with the best in the industry team.